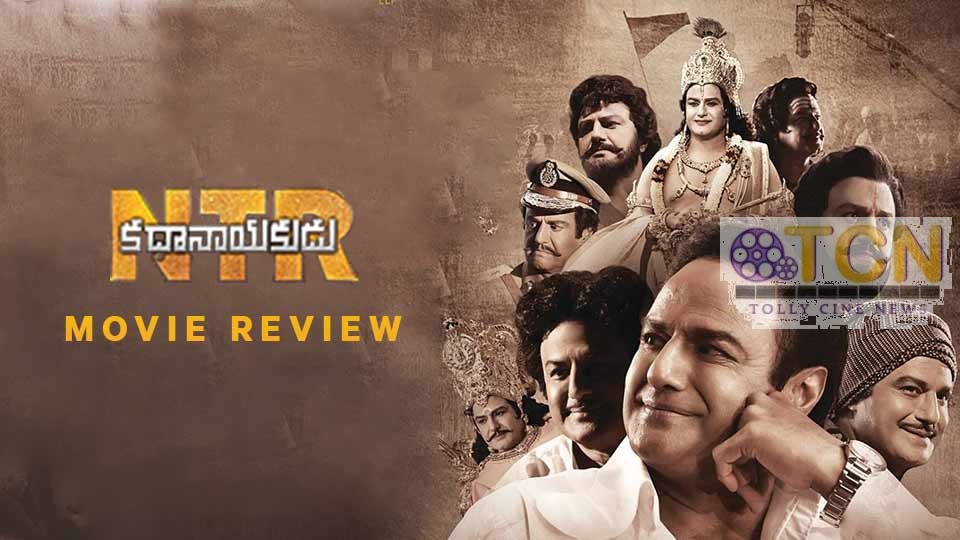 People had started building expectations since Krish came on board for 'NTR Biopic' and the expectations have spiked up further with the stunning first look, teasers and trailers that came out.

The biopic on NTR, the legendary actor and politician, is one of the biggest movies in the recent times.

With Balakrishna stepping in his father’s shoes for the screen and Vidya Balan playing as Basavatarakam, all film lovers have been waiting to see the magic unfold on the silver screen.

Has the film turned out to be a befitting tribute to the legendary actor? Let’s find out.

Story:
In 1984 Madras, Basavatarakam who was undergoing treatment for cancer, reminisces her husband Nandamuri Taraka Rama Rao aka NTR’s life. Flash back to 1947.

NTR resigns his sub-registrar job to pursue a career in acting. His wife Basavatarakam supports his decision and he soon shifts his base to Madras.

Staying in a room with other filmy aspirants, he begins his career in acting and soon gets his first assignment in L V Prasad’s “Mana Desam” in a small role. His acting career zooms ahead in no time.

His acting career goes without much hurdles except the untimely death of his elder son, the personal life is also smooth. Rest of the movie focuses on NTR’s acting career and why he had stepped into politics.

Artistes’ Performances:
Nandamuri Balakrishna has portrayed his father NT Rama Rao’s role. He is seen in many roles that his father had essayed. Balakrishna has suited perfectly in some getups of his father like Lord Krishna’s avatar. In the episodes of NTR’s later life, Balakrishna’s performance is good. However, he looks too old to appear in NTR’s varied acting avatars.

Vidya Balan is a delight to watch. She gets the role of Basavatarakam right. Sumanth as ANR and Kalyan Ram as Nandamuri Harikrishna also impress. Sumanth gets more marks here.

Daggubati Raja as NTR’s brother gets meatier role and he has excelled in the role. The movie has many known actors in important roles but they hardly make any impression.

Technical Excellence:
Krish has been banking heavily on his trusted cinematographer V S Jnana Sekhar. The cameraman is known for getting period look perfect with his astute detailing has done a decent job. His camera work coupled with able support from art director Saahi Suresh and costume designer has lent the movie authentic feel in some places and at other places it is plain ordinary.

The film’s timeline is from 1950’s to the 1980’s, much of the movie is shot in a studio environment. M M Keeravani provides decent BG score, the film doesn’t have songs except background numbers.

Production values are neat. Dialogues by Sai Madhav Burra are good at places. As usual, the writer goes overboard in many places and exhibits show off. Editing is the biggest drawback.

The editors must have slept as the pace goes completely down in many sequences.

Analysis
Making biopic on a great personality like NT Rama Rao, who had changed the course of Telugu cinema with a filmography of nearly 300 movies as an actor, producer and director and ushered in many changes in modern Andhra Pradesh’s politics, and whose life story is known to everyone, is not an easy task.

Compressing his life as cinema into 2-hour runtime itself is a huge challenging job. This is why, director and his writers’ team have split his biopic in two parts – “NTR Kathanayakudu” and “NTR Mahanayakudu”, and we are talking about the first part.

Despite splitting the movie in two parts, Krish has made the movie with 170 minutes of runtime and solely focused on his personal life and acting career.

As recently seen in “Mahanati”, Savitri’s biopic, the film begins in a hospital. Here in NTR’s biopic, it is his wife Basavatarakam who is hospitalized and she is recollecting the memories and the story of NTR starts unfolding.

The entire first half runs on showing how NTR entered into films, the initial struggles, the first success, the contract with Vijay-Vauhini Movies, his dramatic entry as Lord Krishna in “Maya Bazaar”, his friendship with ANR, his noble donation drive for Rayalaseema drought, the various avatar he had done till “Bandipotu” (1963).

Except one emotional scene of his elder son’s death, the first half of the film runs on a pretty straight line. The first half offers only two interesting scenes – the dramatic entry of NTR as Lord Krishna and Lord Venkteshwara, and NTR’s son’s death scene.

Post-interval, the movie focuses on Emergency period, the incidents that prompted NTR to think about “Praja Seva”. There is also small reference of the emergence of Krishna as superstar and NTR and ANR losing their prominence.

The second half also focuses on his later career – “Yama Gola”, “Adavi Ramudu”, “Sardar Paparayudu”, “Vetagadu” and “Bobbilipuli”. There is also one sequence of Diviseema cyclone that made him enter politics. The film ends on the point when he announces to launch Telugu Desam Party in Hyderabad.

In recent “Mahanati”, there is lot of drama (her addiction to alcohol and trauma in her personal life is boldly narrated) to hold the interest and it had good songs (non-Savitri movies) whereas this part of NTR’s biopic only extols the virtues of the great actor. There are no negatives, no villains, no major turns. It is almost like collage of his old movies.

Added to this, the film runs on slow pace for 170 minutes. Hence despite some good moments here and there, the film doesn’t glue us to the screens throughout this movie.

However, it may work for NTR’s fans as it gives glimpse of the great actor’s life, his struggles and his achievements.

All in all, “NTR Kathanayakudu” is a plain biopic that has many problems but can be watched as it tries to tell the story of one of the greatest actor and politician of Andhra Pradesh.